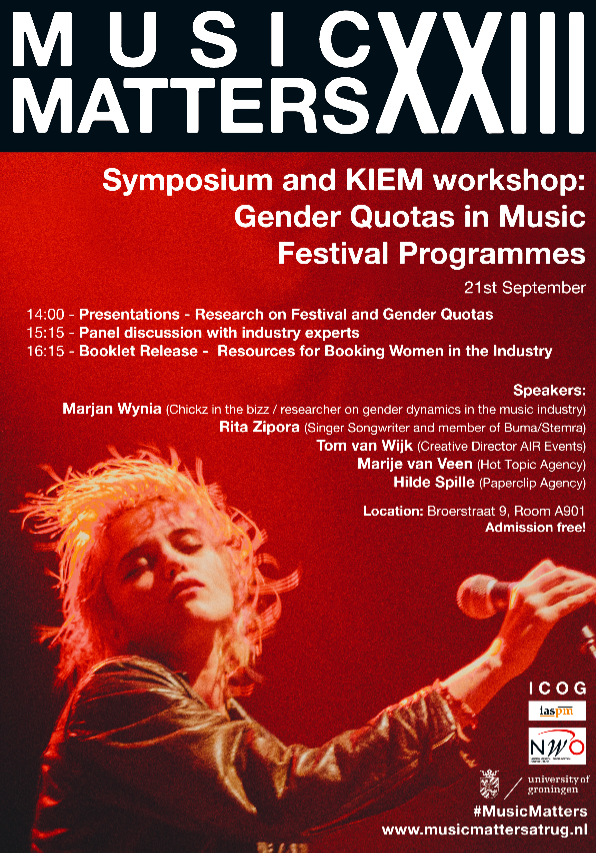 Recent debates concerning women in the music industry circulated widely in the media with well–cited statements by international pop stars like Beyoncé and Bjork. These were later addressed by the industry itself leading finally to questions concerning gender inequality throughout the music industries and the related under representation of women artists on festival programs. While many believe that there are simply far too few women acts in current events, advocates of gender quotas believe that promoters require external pressure to book more female artists in order to ensure fair and inclusive programming practices.

On Friday the 21st of September, the University of Groningen, in collaboration with ICOG and IASPM Benelux, held a symposium funded by the NWO KIEM project to research “Gender Dynamics in the Dutch Music Industries”. During this first workshop of a 4-part, year-long series of workshops and discussions, entitled Music Matters,  the gender relations in music festival programs were examined and discussed with professionals from the industry and academics engaged with gender research in popular music. Students presented their research and industry professionals offered insight into what goes on behind the scenes of the music business. Further, together we will explore with further research, how current booking practices influence the broader gender dynamics within Dutch society. Ultimately, we will pose the question if gender quotas may be the solution to breaking down gender barriers in festival line-ups, setting a powerful and symbolic message to other labour fields.

Panelists featured during the symposium;

Singer songwriter Rita Zipora is Busy a with a capital B. Recently she has released the first EP of her album ‘Wolken’, a collection of electronic pop songs, in cooperation with poet and singer songwriter Robin Block. She has graduated at the Amsterdam Conservatory and written her master thesis on musical copy right in the digital domain. Rita is also on the board of BAM, Beroepsvereniging Auteur-Muzikanten and member of Buma/Stemra’s Raad van Rechthebbenden. As a member of Buma/Stemra’s task force on gender equality she will shed light on Buma/Stemra’s research on women music creators.

Hilde Spille – in 1988, after a bachelor studyin Theology and Philosophy in Frankfurt a.M. (Germany). Hilde came in 1988 to the Netherlands to study Feminist Theology. Within a few months, she switched her study to Psychology and stayed in the Netherlands. With her Master degree in Cultural Psychology, she started in 1995 to work at Paperclip Agency. She books shows and tours for artists from all over the world, as their European agent or as Dutch booker, amongst them are Pussy Riot, I Muvrini, Balkan Beat Box, Sass Jordan and many more.

Since 2002, Hilde has worked as talent buyer for Conincx Pop Festival in Elsloo (Lb.)/NLD. In 2012, Hilde started her blog Compass for Creatives to address the mental challenges that musicians encounter. In this, she can combine her knowledge of psychology with her experience in the international live music industry. Now she has been asked as guest lecturer on a regular basis. She also offers individual coaching and mental training to musicians. After the #MeToo campaign, Hilde developed a mental training programme in ‘Mental Self Defence” for musicians.

Throughout his career, Tom van Wijk (1985) has been your go-to person for the best club and festival line ups. Tom has an eye for musical talent and innovative ideas in musical genres. Fifteen years ago, Tom began his professional career setting up his own event production company and started organizing electronic music events across the Netherlands. Soon after this successful start, he also incorporated booking agency Alter Music to his business. In 2005 he joined leading club and festival promoter CHemistry as a producer and communications manager. In 2010 club AIR opened its doors with Tom being responsible for all things creative as Head of Music. Soon he became promoted as Creative Director of AIR Events at ID&T, one of the key festival frontrunners in the Netherlands with festivals such as Amsterdam Open Air, Valhalla, Fiesta Macumba and Milkshake Festival.

Marjan Wynia has worked as a marketing & communications manager in the creative industries for many years. For over a decade, she has worked for the GRAP foundation, an organisation dedicated to helping talented music artists in kickstarting their careers. She was responsible for the marketing of Muzikantendag, Amsterdams Bevrijdingsfestival, Amsterdamse Popprijs and many more. She has written an online guide to the music industry (Muzikantendag Academy) and edited De Waarde van Pop. She is also one of the co-founders of female network organisation Chicks in the Bizz. Recently she started as a freelance copy writer and next to that she is researching gender dynamics in the music industry alongside other instrumental individuals associated with KIEM.

Kristin McGee is Associate Professor of Popular Music and Jazz at the University of Groningen in the Netherlands. She is the current chair of the Benelux region of IASPM. She has written on the subject of jazz, gender and media for her 2009 monograph Some Liked It Hot: Jazz Women in Film and Television (Wesleyan). This presentation was part of her upcoming publication Remixing European Jazz Culture as part of Routledge’s Transnational Jazz Series.

The Department of Arts, Culture and Media in connection with the research project Music Dynamics in the Music Industry funded by the NWO KIEM (Creative Industry – Knowledge Innovation Mapping) at the University of Groningen is pleased to announce a two-day symposium to be held on May 16-17, 2019. The symposium will bring together both scholars and industry professionals to share insights on the topic of Gender Dynamics in the Music Industry. The intention is to share resources and create a dialogue to better address the lack of gender parity within the music industry. Further, we seek to extend to discussion to fields connected to, but not exclusive to the (relatively better researched) performance sphere. We welcome scholars and industry professionals from all genders and from all genres of music from classical to folk and popular.

For more information on the content of the symposium visit the Gender Dynamics Symposium: May 16th-17th tab on the right.

In recent years, a general recognition of the gender dynamics pervasive within music seems to be on the rise. But attention is mostly drawn to the gender disparity between professional artists. To better understand the practices disadvantaging women on concert stages, the time is ripe to shift attention to  focus upon talent platforms. While in music education programs, gender is well balanced, yet the informal routes to professional musical careers seem to disadvantage female artists disproportionately. In this panel, industry experts and gender scholars debate the gendered practices of talent platforms that continue to play a role in the gender gap within the music industry more broadly. 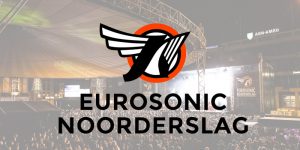